We are pleased to invite you to Experience Ooga Booga. CURRENT OBSESSION just launched The #4 Supernatural Issue and this theme will be explored on the 19th of December in Amsterdam’s STUDIO 47. Invited artists will practice, discuss and perform what they preach, bringing you the ultimate Ooga Booga Experience.

CURRENT OBSESSION’s #4 Supernatural Issue attempts to connect the mystical notions of shamanism and magic to the creative process itself. While the concept of the artist as shaman was elaborated by artists in the mid-20th century, we were curious to find out how it’s reflected in today’s world. Essentially, it’s about creating one’s own narrative, mythology and belief system, while daring to challenge the conventions of art and design.

Starting from the CURRENT OBSESSION magazine as a format, and inspired by its characteristics and possibilities, the theme of the Supernatural will now be explored through the Ooga Booga Experience. We will focus on in-depth perception of artists’ work brought together in a dynamic programme consisting of diverse contemporary views on the subject Supernatural and its implementation in artistic practice.

Octave Vandeweghe, currently enrolled as an artist in residence in Trier University of Applied Sciences, Department for Gemstones and Jewellery, Idar-Oberstein, will present A Brilliant Cut in which he explores the link between the natural and faceted shapes of (gem)stones. During the talk he will share the insight into his artistic practice and making process.

Brynjar Sigurðarson’s work is linked to storytelling and narratives, which are deeply rooted in Icelandic culture. At Ooga Booga Things That Happened, a book about Brynjar’s work, accompanied by a vinyl in which he recorded and composed (auto)biographic stories he has collected throughout his journeys.

Taking chocolate as a raw material out of its context, Michal Avraham and Borch Socher are experimenting with its shape, colour and texture by creating a series of edible rocks, a unique experience that starts with shape and results in taste. During Ooga Booga the Chocolate Rocks will be sliced and handed out, revealing their surprising filling.

Anna Bak has a special focus on survivalism as an alternative mode in the production of our life. Survivalism describes the fear of an imminent collapse of civilisation as well as the romantic fantasy of escaping the modern, urban society’s ambivalence. Wilderness Survival – A Guide to the Aesthetics of Survivalism is a project about the survival of real or speculative dangers, which considers practical and philosophical understandings of the survivalist lifestyle.

Multimedia artist Pieter Paul Pothoven has a special interest in the Middle East. In his work he explores the role of specific elements of this turbulent region in western (visual) culture and contemporary media. During the event Pieter Paul will give a talk on his artistic practice.

Artist, writer and performer Jasper Griepink explores utopian old-age and new-age thinkers, medical practitioners, spiritualists, philosophers and the co-habitants of (sub)cultures and alternative communities across the world. During Ooga Booga he will conduct a Bondage Wedding Ceremony; an alternative and gentle wedding ceremony in which the bodies of a couple, a group or an individual are fully bonded and tied together. In collaboration with costume designer Janneke Raaphorst, Jasper will be making this year’s CURRENT OBSESSION’s Piece by Piece, a ‘wedding jewel’ based on the ribbons that are used in his Bondage Wedding ceremonies.

Performance duo Echo + Seashell (Henna Hyvärinen and Susan Kooi plus an IPod) will close the event. Prepare yourself for a mix of electronic synth combined with apathetic singing lyrics and internet-aesthetic consisting of a bizarre mishmash of odds and ends, cat videos and seafood.

Echo + Seashell will be adorned with jewellery pieces by Vann Kwok. (Out of) flux is a project that addresses the relationship between what occurs naturally and what is technically produced – Chance vs. Choice / Control vs. Chaos. The collection illustrates how the placement of a piece of jewellery both on and off the body affects posture and gesture in relation to one’s surrounding space.

Initiated by Current Obsession. Curated in collaboration with Anneleen Swillen.

Experience Ooga Booga will take place on Saturday 19th of December from 13 pm till 10 pm at STUDIO 47, Amsterdam. STUDIO 47 is an initiative by Céline Manz, Temporary Open Studio 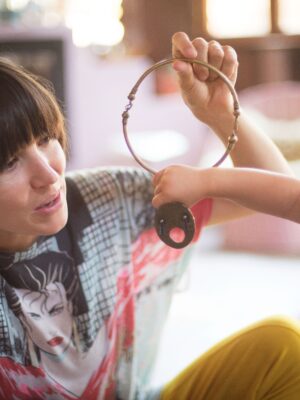 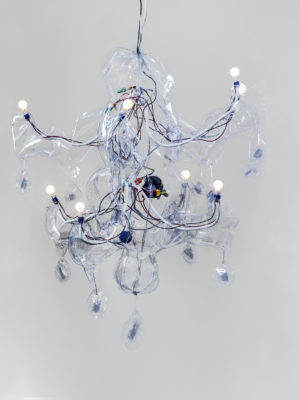 Spirits in the Material World 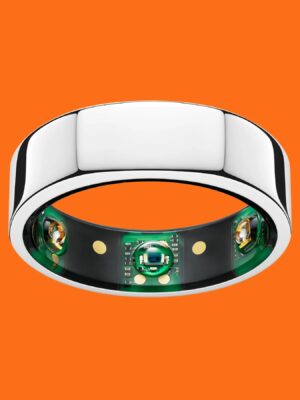