You decided to bring your business down south, to Rottingdean, and call it Rottingdean Bazaar. Can you talk about your new life here, your reasons for moving, and how this nifty name became what you call your collective work?

James Theseus Buck: I’m from Brighton, which is next to Rottingdean. My grandmother had a shop in Rottingdean for a long time.

Luke Brooks: When we were both separately studying at college, we worked at home a lot. And that’s how we are working now, from home. We didn’t want to use our names for what we are doing because, apart from it sounding a bit long-winded, we want it to be open for different possibilities. And we tend to appropriate things from our environment. Rottingdean is a strange word.

James: We are trying to work in a way that is sustainable and enjoyable, and being here in a village is helpful for that.

Do you consider adornment, both fashion and jewellery, as a way to narrate and communicate certain information? And if so, how does that play out in your work?

James: Through working on shoots and styling with clothes from other brands, you can mix the meanings of fashion and change its original intention. We enjoy playing with the language of objects and clothes, even if the outcome becomes nonsensical. Anything is up for grabs and anything could stimulate work and ideas.

Luke: We think about this when we are making things. It’s more like free association as opposed to constructing any kind of messages which attempt to make sense.

James: For example, if we make a sweatshirt, which has knickers and tights on it, the materiality of the knickers and tights comes before anything else. We focus on what will work with a particular technique or object and then step back and think about any connotations, associations or signals afterwards.

Luke: When I was on my own and younger, I naturally tried working under the idea of trying to send distinct messages in the physical work. I was knitting and crocheting a lot, and for some time I wanted to try and communicate messages about ‘craftsmanship’ and how craft is important, beautiful and to be put on a pedestal. I was trying to write a manifesto in my head, but eventually I found that way of working felt very limiting.

Talk about the Badge Taste, what it means for you, and why you chose to start with it as collaboration. You once called it an Instagram project. Why did you choose this way of dissemination/presentation?

James: I had made some badges during my Master Degree, which contained pubes and were inspired by Victorian mourning jewellery.

Luke: We wanted to start working together by doing something which has physical constraints, something contained, and seeing how much we could play within those. We are interested in making products which tread a line between being one-offs and also relatively repeatable. The fact that making the badges can often be quite fast was a factor too. It’s never painful making them because if something doesn’t work we can move on quickly, with nothing to lose.

James: Instagram was a good fit for it because of its archival nature and instantaneousness. It’s nice to have a continuous project that could go on forever. The possibilities are limitless. It is also a way of stimulating larger ideas.

Luke: I think we are also drawn to Instagram because it is democratic and easily accessible. We don’t want what we are doing to be elitist, but rather very approachable and straightforward in the way it is presented.

Badges could be considered one of the most direct and simple ways to display and wear an image or a message on the body. You choose to place mundane objects onto that display. Can you talk more about your thinking behind that approach?

Luke: There is no deep meaning intended in the choice of materials or objects. We try things that are around us, or specifically look for things if we think that something could work. Not every object is physically suited to being badged, or can’t be figured out yet!

James: I find it interesting to produce work that can possibly be universally understood on a visual level. For example, the tragicomedy of the ketchup sachet oozing into the badge. We have talked before about whether buying and wearing something which looks like one could have potentially made it themselves is extra special in a world where you can instantly tell when something has been produced by a factory.

Luke: If something can be not just appreciated, but also possibly quite easily imitated by a good amount of the population, I think that’s really exciting. It’s like a tune that anybody can sing along to. It means that the object is tapping into something quite universal in someway and also tapping into something original, in the sense of a common history – origins. I think all that also has to do with why we are attracted to playing with mundane, immediately-knowable objects.

James: With badges I suppose we do concentrate on certain processes of making them. Some are stretched over the body of a badge, some are caught underneath standard plastic seals, some, like the cress seeds badge, have plastic but with a hole in it. This groups some of them together, and also informs how we approach other objects to possibly use.

How did you build the Rottingdean Bazaar SS17 and what was the research behind it?

James: In the past we have both individually made garments, which somehow encapsulate an existing piece of clothing or object. I had experimented with laminating dried flowers onto clothes. There were pieces like that in my MA collection.

Luke: And for example one of the pieces in my MA collection was an old pair of grey jersey boxer shorts, which I crocheted into a matching grey sweatshirt, so that they were suspended in it like a frame. I also used found objects in other pieces.

James: So looking back it really came from those separate ideas coming together. The research we did for it was comprised totally of physical tests and drawing on those previous experiments. There was no intentional visual, fashion research involved.

Luke: The process was and is very similar to the badges. We had the set fabrics and technique and worked within that, seeing what we could press next. It was really fun.

James: We are still making new pieces for it. We’re not really seeing what we are doing as seasonal. We will carry on working on a particular series as long as it still feels fruitful and interesting to us.

Talk about your chosen ways of presenting work. James, you’ve mentioned that you prefer the viewer to be closer to the work, see it at an exhibition or in a photograph. How do you employ these strategies? Can you also talk about the way you presented your SS17 Rottingdean Bazaar collection at Fashion East?

Luke: We are not just here to make and sell stuff. We are interested in the academic side of what we do and how it can contribute to other things which are happening, or have happened.

James: Part of calling it Rottingdean Bazaar is wanting to put the emphasis on the workshop aspect of what we are doing rather than branding. We are art directing and styling photographic editorial work too, alongside making physical things. We are aiming for a kind of transparency of the process. The impetus for the photographic work is purely out of a sense of interest and play. It is a relief and a joy to do things which have relatively quick closure, after spending a lot of time on making and presenting 3-D things.

Luke: We have been collaborating with the photographer Annie Collinge and also the photographer Lucy MacDonald, who James went to college with. We don’t only work with our objects, but we also borrow stuff from other people. It is exploration beyond the process of making and selling, solely for the enjoyment and investigation of doing something. Earlier this year we did a collaborative performance at Palais de Tokyo, working with some fine art and architecture students from St. Martins. This summer we did a tent at Port Eliot festival and we made some costumes for a performance by Linder Sterling at the ICA.

In your earlier work you were attempting to capture the information on existing surfaces, like with Luke’s gravestone rubbings; do you think it’s connected to the latest work you make as Rottingdean Bazaar?

Luke: I think I’ve always been really interested in the idea of talismans and the talismanic aspects of clothing. How some people have supposed that we first started wearing elaborate clothes more for spiritual purposes than practical. And I can see that interest in what we are doing now. Individually and together we have both been into making things which capture and clearly display a distinct process. To sort of freeze a moment in time. That was what mostly drew me to the grave rubbing, rather than the fact that they were graves. It is a clear process. It could have been manhole covers instead.

James: We find it exciting when the variable outcomes of a single action decide what an item of clothing or object could be.

James, you’ve mentioned in one of the interviews that for your graduation work you first started making/collecting objects, which later became the root of the work, and informed the garments. We, as a jewellery magazine, are interested in the relationship between an object, the body and the act of wearing. Could you both comment on that?

James: I think it just seemed to make sense that real objects that you find are a way of researching that feels totally personal; no one would have exactly the same things as you. So finding a story in those items was really exciting and led me to make my own objects that could then say something about the clothes. For example the daffadildo (a clear resin penis with a whole daffodil cast inside) just made sense hanging out of the fly of a suit, as a piece of jewellery.

Luke: We collect quite a lot of found or second-hand things that we live with, and dress in and we either use them directly or they inform what we make. And we also make objects that are not intended to be worn, like the cigarette clocks that were also shown in our London men’s fashion week presentation.

When does wearing objects become fashion?

Luke: That’s a hard question! When you, or somebody else, makes the decision that it is.

James: Maybe when you can see the object’s intended use being changed.

All others, Rottingdean Bazaar

This article was first published in #5 Current Obsession Magazine, 2016 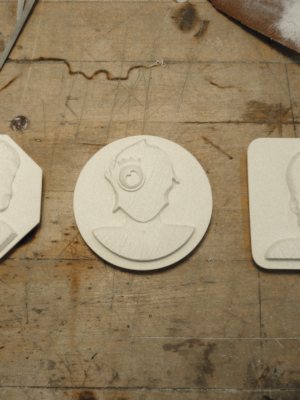 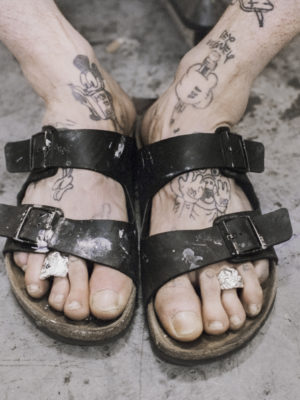 The Way of The Future with Göran Kling 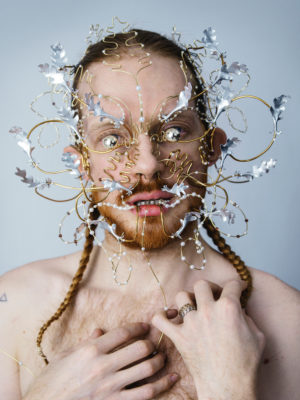 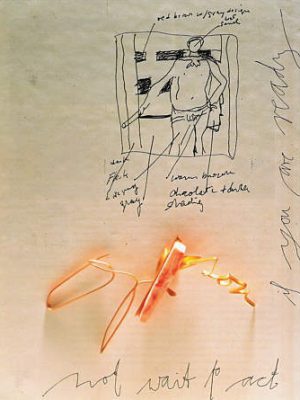