To access Sophie Hanagarth’s studio, you must first climb the hills of Paris’ eclectic 20th arrondissement. After passing a Neo-gothic church, a very ‘bobo’ yoga center, an ‘afro-diziak’ restaurant and a second-hand shop, you will find yourself faced with a tremendous door. Hidden behind it is a lovely courtyard, paved in stone and bursting with plants. Finally, behind a second well-ornamented wrought-iron door, you will find the tools of the blacksmith: the tools that bite Sophie’s iron jewels, which themselves snap our arms and suckle our fingers. Sophie Hanagarth is certainly a carnal jeweller.

Marguerite Bones (MB): What are your main obsessions?

Sophie Hanagarth (SH): I’m fascinated by the decorative arts, things like the ornamentation on ancient Greek ceramics. We might say those decorations are superfluous, unnecessary, but if humans have been making them since prehistoric times and continue making them today, they must have meaning. For me, decoration links to infinity. When an ornament circles around a pot, its continuity becomes eternal. In this same manner, a bracelet encircling our wrist may become a kind of charm. In the end, is it really only embellishment?
I also obsess over why we use flowers in our ornamentations. Why are we drawn to those particular kinds of elongated curves? When I arrived in Paris, I had just made the Bijoux de famille (family jewels). So, when I found myself observing those sculpted garlands you can find above the windows of Paris, all I could see were balls hanging everywhere! Then, in Le Louvre, I observed gravestones engraved with those same flowery ornaments. These engravings no longer represented the flower itself, they represented something more like an offering; the process of giving and receiving, life and death. These garlands confirmed my thoughts about the eternal, repetitive nature of ornament. They sculpted closed garlands around death, there is something so spiritual about that.

‘In order to challenge ourselves, we must get away from jewellery and and observe what is around us. What objects do you fancy? What interests you? What do you see growing in your hand?’

MB: How did you learn blacksmithing?

SH: With my jewellery background, I have been forging silver and gold for quite some time. Nevertheless, learning blacksmithing was a new challenge. Silver and gold are worked cold, when they are workable but still fairly hard. Whereas, with iron you need to heat it until it is red and as soft as cake dough. It’s completely flexible! I often say that we could work it with our hands, it’s just a bit too warm…
I also went to visit the the Musée de l’histoire du fer (Museum of Iron History) with Monikka Brügger, where blacksmiths do frequent demonstrations. During the demonstration, they said that iron is like modelling clay. I knew this already, which is why I had brought my own Plastiline model of Traquenard with me! I took it out and asked them for some tricks to make the teeth. The blacksmith told me to link two stainless steel marbles with a wire, but that seemed very unstable, so I made my own interpretation and shaped iron into half-spheres attached to a pair of pliers that I could hammer on. To make the jaw bones for Traquenard, I used those homemade teeth pliers to bite into the soft iron. You need two people; one holding the plier, the other one hammering.
For my piece French Kiss, I wanted to create this tricky geometric shape similar to a horse saddle, which grows from one side and turns inward on itself. So, I took a course with Christophe Desvallées who is a blacksmith but also a dinandier (a coppersmith). He showed me how to raise copper into the shape of spoon by hammering it on an ‘S’ shaped tool. I applied this same technique to hammering the iron for French Kiss.

MB: Can you tell us about the process of creating your work?

SH: When I set out to make the piece that became Traquenard I had this desire to make a forged bracelet. I had this image of an ankle bracelet in my mind — I could see a pair of croissants attached so that their counter shape would look like a mandore, an instrument in a shape of almond. I often begin a piece by modelling it in clay, which I like as a material because I can destroy it! So, I shaped those croissants from modelling clay and pinched them with my fingers, thus the teeth appeared. From there, I made the jawbones from an iron bar, using a plumber’s blowtorch from the retail shop. I forged the piece by deduction: ‘When I hammer here it bends this way, when I hammer there it bends that way. Oh no! It’s bending in the wrong direction!’ The trouble is to straighten it and bend it again in the direction I want.

MB: You had not planned to make a mouth?

SH: I wasn’t looking for a mouth at all, it appeared! This is what I tell my students and what I’ve learned as well: don’t start with the goal of making jewellery, work first on a theme or a process. When I studied in Geneva, we worked on the concept of rhythm for a full semester, without making any jewellery. I have grief with contemporary art and object-making sometimes, the way we create now feels unsustainable, like the feeling is not going to last. It feels rarer and rarer to experience real emotion in the making process. Nowadays it’s always a fun fair. In order to challenge ourselves, we must get away from jewellery and and observe what is around us. What objects do you fancy? What interests you? What do you see growing in your hand?

When I created the chains , I wanted something sensual. I looked to the voluptuous aspects of hair, its curves and twists. I was looking for my own type of chain-links, so I made them gradually and they became those braids.

At another point, I realised that if I made a simple fenestra in a bun of metal, I could express the form of lips. My first attempt didn’t seem to attract much attention from the public, still I liked this piece. I thought, if it was not working as a bracelet, why not try it as a ring? I started out making them from wire and embossed sheet in three parts: the canal and each lip. This construction was very tedious. Then, I had an intern model it from wax so that it could be cast as one piece, but it was too massive. Finally, I made them from clay, and we dipped them in bee’s wax several times, like Peter Boyle does for his pots. I had to softly break and dig out the clay in order to leave only the thin layer of bee-wax. Then hop, to the caster! With this technique, each piece comes out unique, with its own thickness and length. The Lipstick is like a carp mouth that absorbs you.

Even though the series is titled Lipstick, people often still see the form as a butt or breast, which I do not see as a problem, because I try to stay ambiguous. For example, when I made the ‘worms’, I envisioned them as bracelets for a divinity like Hera or Medusa, I thought there was a Greek element to it. I considered the worm as a graphic element that I could curl in one way or another, to return to the idea of eternal ornament. I considered the knot, the braid, the twist, the Hercules knots that you see in Roman or Greek rings, and others that are Persian in origin… and then I remembered that worms are hermaphroditic! It started to become another story. The bracelets could be a worm Kamasutra, with worms entangling each other in different ways! I explored the articulations; I used those brain teasers made from nails to help me visualize different levels of entanglement. Not everything is obvious, but it’s there and this is how I explore in my work, through a back and forth between references and experimentations.

MB: You have quite a collection of ex-voto as well…

SH: Yes, it became so consuming at one point that I stopped buying pieces myself because so many people were offering them to me, mostly my parents actually! I would get so nervous and shaky with excitement each time I would see an ex-voto at an antique dealer. My collection started with a bunch of tiny ex-votos I collected on a trip to Mexico, many of which remain my favorites, especially the belly button one. This one (below) is from Munich, where they have a tradition of casting ex-votos in lead and zinc. This one here symbolises the tools of the Passion. I’m not sure it’s an ex-voto, maybe more of a popular decoration. Ex-voto are not worn on the body itself but are displayed in churches or places of worship to thank God for healing a body part.

‘By wearing jewels, you are staging yourself. There is something artificial about ornament, but in the end, it might show more about yourself than your clothing.’

MB: If I tell you ‘miam-miam’ what do you see first?

SH: A tartare with French fries!

MB: Do you affiliate food, sex and jewellery?

SH: Yes, they all share a sort of gluttony, but also a certain… lack! The desire to never lack essential nutrients or… other things. There is something bodily about both eating and wearing; as you swallow things, you carry them in your body instead of on it. Excrements also interest me, because they used to be a sign of luck, they made shit objects from porcelain in the 19th century.
Maybe I am a sensual person, surely carnal. Michèle Heuzé said there is something of the ‘carne,’ (the flesh) in my work. For example, when I made the teeth, what triggered me most was the moment that you put the piece on and are fully absorbed by it. I have believed for a long time that that when you slip the jewel on, you also slip your body on — the ring that slips around your finger, consuming it. It’s a delicate sensation, but I’m not disturbed by weighty jewels. The opposite, actually, because when we feel its weight, we feel alive.
There is also something in the ‘mise en scène’ (staging): you take it out, you lay it on your bedside table, like you would your dentures, and in the morning you choose your clothing and the jewels you put on with it. By wearing jewels, you are staging yourself. There is something artificial about ornament, but in the end, it might show more about yourself than your clothing. 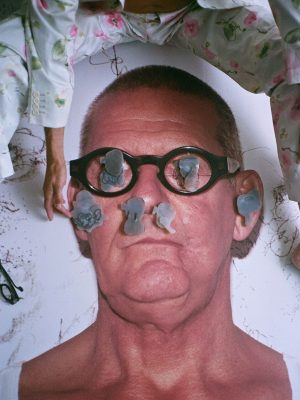 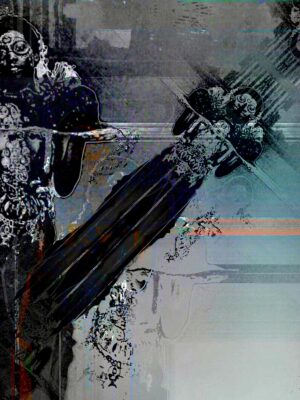 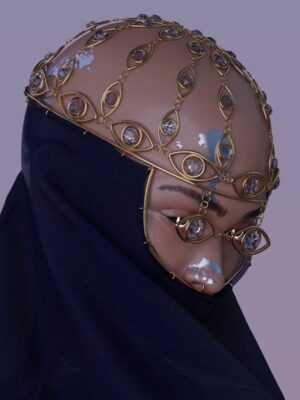 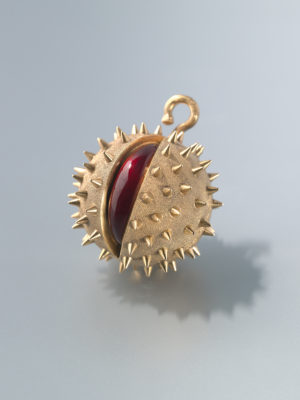