My usual path includes explorations of motley bunches of household goods in cardboard boxes, deer antlers, piles of clothes, crystals, sheep hides, books, records, home-grown apples, art prints, oil paintings, postcards, handmade jewellery, curios from nature, furniture, kitsch, Persian carpets… the enchanting accumulation of crafted products and abandoned heritage, kept alive by merchants who sell a story along with their goods, to stimulate business with their alluring words. At the Noordermarkt, anyone can be called a ‘schatje’, a sweetheart, no matter if a lady or a punk. Anyone can assume the role of a sailor, an adventurer, a storyteller, a philosopher or a poet. The Noordermarkt – where strangers and travellers from all over the world pass by and everyone knows everyone – is the centre of the world within a village.

One warm September day, when I was strolling around the market like so many other weekends before, I found a treasure. On a stand draped in sunlight and bright red fabric was a heap of madness from a hippie gone wild. Hundreds of pendants, rings and earrings formed a tangled mountain of jewellery. Focusing in, my eyes discovered the mad power of a free craftsman. Every piece of jewellery revealed the unleashed energy of a maker with no fear and no shame: a symphony of reused patterns and symbols and a carefree disregard towards traditional jewellery techniques. Here was the work of a diligent craftsman with the ability to include any quotidian object into his frantic jewellery. Silver plates and cutlery, discarded metal, antique glass, Dutch coins, horn, crystals, animal teeth, souvenirs from North Africa were all transformed, moulded and incorporated into his work. Obviously, he was not seeking to master conventional jewellery techniques nor to create elaborate embellishment. The impromptu solutions forced upon the crafted pieces to make them function as jewellery, the visible moment of the making, and the total expression of the maker triggered my interest.

This maker did not seem to bother with technical detail, when he gashed open an antique North African silver plate to roughly form it into a mega ring holding a giant glass bead. The fusion of something that looked like a sliced silver cup, an antique lamp holder, a big chunk of green glass, several settings of semi precious stones and overflowing tin solder, formed a pendant the size of a man´s fist with the visual power of insane magic.

Striking faces caught my eyes. One visage, carved in a horn ring, seemed to carry the serious wisdom of an ancient cult. Variations of a kind of face-icon reappeared in the oval, even hammered forms of silver spoons, with their cropped handles bent into loops, to make them function as pendants. I saw smiling faces simply formed out of wire, two small circles for the eyes, a straight line as nose and a bent line for a smile. I felt observed by the surreal formation of three small cat heads, holding the ambivalent power of joke and wizardry. What at first appeared to be a free, humorous, carefree expression of a past hippie time, was at the same time serious and had a brutal twist to it. Some pendants looked as though someone had run a car over them; an animal jaw forged into a lump of aluminium; metal sheet bent around stones and crystals as if the sheer conjunction of these materials was enough for a successful outcome.

A blank, polished, grey fossil with a silver dish densely, forcefully folded around it, was decorated with several silver coins. In this object the value of money and time were put into such relation, that for an instant, I believed to understand the momentariness of life.

While standing in the sunlight trying on jewellery and grouping pieces that fit well together, I noticed bypassing market goers were showing interest in a way that made me feel as though they recognized the language of this treasure too. A woman came and looked at the work for a while and said she knew the man who had made it. She bought a pendant made of a fork; it formed the hand of Fatima, with a red stone in the centre and a cross and star hanging on the sides. I started to realize that I had found the leftover work of someone from the past. The sales guy himself confirmed it: ‘This is the work of Happy Day, he died a couple of years ago’.

Was I surprised? That´s how it goes; you die and your work stays in this world with all the other material things. Maybe it ends up on a table at a weekend market or maybe it stays with your friends and family. I was surprised, though. My first impression gave me a feeling that the maker of these objects did not separate work from life. That, instead, he actually tried to bring everything together. Maybe now his intention to make all one, was to be completed: the connection between work, life and death. I had found this treasure and now I needed to make the passage from death to life again, to recognize the energy and carry it along. I spent the cash in my pocket intended for grocery shopping, to buy some of my favourite pieces. Pleased with my purchase, I immediately added one of the pendants, one with a smiling face, onto the necklace I was already wearing for luck, together with a silver hand my mother had made when she was a young girl, and a heart amulet my grandmother gave me when I was a child. I now had eleven new pieces and was glad to integrate them in my small collection of personal treasures.

But I wanted to know more about the dead jewellery maker the man at the market referred to as Happy Day. I returned to the flea market a few weeks later to follow my curiosity and found his old friend and colleague. She said she knew him for over twenty-five years, from a time before she started her own trade at the market and she invited me to her home. We sat in her studio with coffee and dark chocolate while she tried to find old memories and photos.

‘I always liked him for his openness, his love and kindness to everyone who came by. No matter if it was a rich lady or a poor vagabond, he treated everyone the same. He was very important to the market.’

Fluent in English, French, Arabic and Jordaans, the Dutch slang of his quarter in Amsterdam, his friend described him as cosmopolitan, a craftsman and artist who never attended art school. She told me he worked in his kitchen and made jewellery from everything he saw. She named his collection of shells, animal skeletons, coral and snakeskin the Miracle of Life.

People started calling him Happy Day because that´s what one would hear him shout out all day from his market stand. His name was his mission: Enjoy life! Not more and not less. He wanted everyone to enjoy life and his house was filled with music and food for all of his friends, whether that be summer in Amsterdam or winter in Rabat.

Originating from an affluent Moroccan family of traders, he decided to lead a hippie life and left Morocco because he felt restricted there. When he first came to Amsterdam in the late 1980s, he started selling African jewellery. Very soon he began to make jewellery himself out of rocks and shells from Morocco, combined with earrings, bracelets and knickknacks he found in the pockets of clothes from Amsterdam flea markets. His calling was to be heard at different locations of Amsterdam: the passage underground of the Rijksmuseum, the Vondelpark, the Leidseplein, until he found a steady place to sell his handmade jewellery at the Noordermakt.

I understand that the use and combination of religious symbols in his work, such as the Hand of Fatima, the Star of David and the Christian Cross go along with his idea of uniting and living peacefully together. A video clip his friend took shortly before his death shows a slim man sitting in bed, drawn by illness and covered in a duvet, peacefully filing on a piece of metal. She told me it was the last piece of jewellery he would ever make: a silver medallion in the form of Fatima´s hand with a cut out star and a hanging cross in the middle holding a small ruby. It was signed Happy Day 2008.

The strange connection I felt to Happy Day led me back to the dealer who owned all of his work. I wanted to document everything, take photographs of the most amazing pieces, I even dreamt of convincing the guy to let me organise an exhibition, to highlight the beauty I saw in Happy Day´s work and showcase it to a broader audience. But when I found him again, it turned out that most of the work was already gone, sold at the market. Plenty of other people also responded to the spirit of Happy Day and I am glad a small piece of his cosmos found its way to be woven into mine.

Jeweller. Born in 1979 Stuttgart, Germany. Studied Applied Arts in Portugal then graduated from the University of Applied Arts in Pforzheim, Germany in 2007. Based in Amsterdam, the Netherlands since 2009.

This article was first published in #5 Vernacular issue Current Obsession Magazine, 2016. You can get the issue here 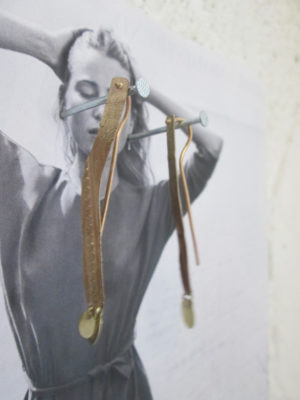 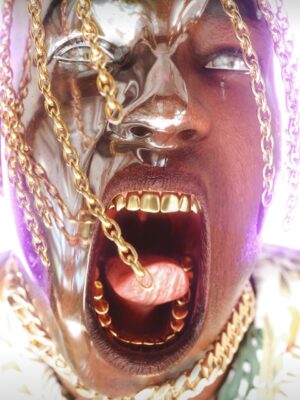 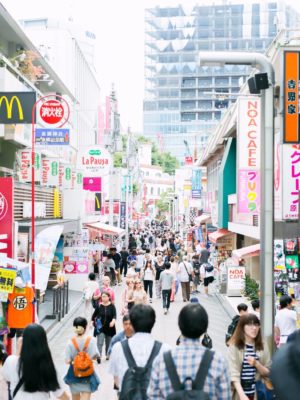 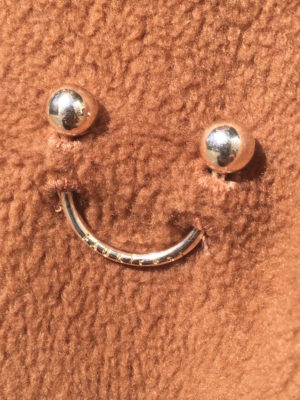 Anything can be Anything and it’s all good, for Real!