She has no experience but she’s eager, and to show me she cleans all my anvil and hammer surfaces to a shiny, like new finish. In exchange, she tells me she wants to set her crystals. It doesn’t matter what the settings look like, they don’t have to be pretty, she says. The crystals just can’t fall out.
And that’s how our friendship started. It was around the same time that Kelsey’s spirituality started to emerge and put itself together and her crystals were of total indication.

September 2014 was the beginning of what would become a five-month crash course into a new spiritual practice for Kelsey. She had been to psychics in the past and had surrounded herself with people following different spiritual paths, but now she was starting to get into her own spirituality more seriously, in a way more in line with her everyday life and art practice. Through talking with fellow students similarly interested in other spiritual realms, Kelsey’s awareness of her own particular psychic tendencies grew, tendencies that she wasn’t really able to understand or identify by name until now.

It all started after the spontaneous purchase of a small, tumbled quartz with which she decided to meditate. Kelsey already knew that quartz stores and amplifies energy, so she began by feeling the energy of the crystal itself. She then tried to transmit her fullest intention of the day back into it, goals of love and gratitude, in hopes that it would radiate that energy back to her afterwards. It was a nice meditation. A few hours later, she picked up the crystal during art history class and held it in her hand again but quickly became quite queasy and uncomfortable. It was as though she was getting some kind of high off of it, the sensation was too powerful. She held the crystal with her sleeve. ‘I didn’t want to be around it, and I still can’t even really hold it, but it was my first one and I kept it, even though we just don’t vibe well.’

This was Kelsey’s first personal experience with crystal energy. Wanting to understand more, she turned to her friend, Grace, for guidance. The two began meditative exercises together. ‘Realizing in my experiences with Grace, who is clairvoyant, that we were able to communicate with each other really well nonverbally, like psychically in meditation, was mind-blowing. So then I started to really want to cultivate it, this thing that I was never able to control or comprehend before. Grace and the others told me that what I was experiencing was clairsentience – a psychic feeling in different parts of my body with sensations in temperature, shape and color…’
In joint mediation, Kelsey and Grace would send messages to each other by programming certain crystals with energy, Grace working with Kelsey’s clairsentience and Kelsey working with Grace’s clairvoyance. And it worked. For example, if Grace visualized a directional, thermal movement, Kelsey would be able to feel it in certain parts of her body. She would then do the same thing with sentience through color and shape for Grace to visualize. These exercises helped Kelsey gain control of her psychic muscles.

Kelsey’s newfound excitement led to certain discoveries about how in touch to the senses she already was. Before coming to Rome, Kelsey spoke of struggling with anxiety, a lot of which came from not being able to tell the difference between her own energy and that of someone else. To her, it all felt the same. ‘It’s not just empathy, but I think I didn’t really understand that I could be experiencing someone else’s emotions, apparently because I was attuned to it in a heightened way. I noticed I was feeling really emotionally out of control all the time because I couldn’t decipher what emotions were actually mine. It really hard for me to be in social situations.’
She began to acquire more quartz in hopes of using it to tailor specific experiences. But she quickly started to notice how the crystals’ influence also vastly improved the quality of her life. Whether she was meditating with them or even just being around them, she felt happier and much more positive. Black tourmaline was next for Kelsey due to its defensive qualities – ‘really feeling and knowing that it would protect me from negative energy, protect me from negative energy that’s not mine made it easier to actually interact in the world.’

Harnessing Kelsey’s clairsentience was a way to remedy anxiety and more frequent meditation with crystals began to help her navigate the fields of energy around her. She began to think about all the potential different ways to play with this newborn control. Perhaps, eventually it could even be another tool for art making.
Kelsey’s previous artworks demonstrate an early tendency towards this idea, Tink’s House being sort of the restaurant version where food, the element of flavor, texture, and the temperature in food was abstractly reflected in the materials she used to build the space and its environment. ‘I’ve always been interested in this idea of sensory experience. I see now it’s because I’m clairsentient and that’s a huge part of how I experience the world… what would it be like to actually bend energy experience for people, for myself?’
And so as the autumn went on, her crystal collection grew. The energy exchange with certain crystals was now becoming a part of her daily life to the point that she felt the urge to wear them. ‘To wear a crystal then – instead of just holding quartz and using it as a tool – was totally different because I could basically curate the energetic field around me.’
Suspended on thread then tied to a string, wrapped in a rubber band or paperclip… however she could hang them didn’t matter, she just needed them around her neck. Though the necklaces looked thrown together haphazardly, they were deliberate. The crystals, usually in sets of no more than five or six, were spaced out with knots so they wouldn’t touch. ‘I didn’t want their energy to pollute each other. I need to cleanse each crystal separately in glasses of salt water, so there had to be enough space between them for that too.’
The necklaces overtime got better. They had to really, Kelsey reports losing nearly seven crystals due to the obvious flaw in her MacGyver-esque assemblage. And that’s why she came to me, because continuing to lose crystals that she had bonded with emotionally became dramatic and depressing. We made some improvements, setting certain new crystals as minimally and in the most immediate ways possible just so they could be hung. No fuss was necessary, just function. Plus, Kelsey doesn’t even really like jewellery she barely wears it.
‘The crystal necklaces came out of wanting to lay out my experiences or my energetic surroundings for the day, like giving medicine to myself. Or setting intentions, like carrying forward a meditation or being very specific about exactly the kind of energy I need that particular day.’

Though Kelsey has learned a lot about the many qualities and properties each type of crystal carries with it, the decision-making process for which crystals to acquire and wear also heavily relies on intuition; it’s enough for her to know what makes her feel amazing, like opal, for example, without necessarily knowing why.

At the time of our interview, Kelsey runs me through what crystals are strung on her necklace. First, a long and slender rose quartz that radiates positive love energy. The next one, a rounded greenish-blue stone, possibly a labradorite though she’s not positive. Being the silliest one, it’s my favourite: hanging vertically on a small piece of purple vinyl thread that doesn’t quite match the stone’s girth. Then comes a piece of pink coral; ‘I really love this one especially, it’s just super Roman, it’s more symbolic for this whole experience. But it’s also a heart chakra, similar to the rose quartz.’
A citrine follows; she describes it looking like a gold and white tooth icicle. It’s one of the few stones that does not absorb negative energy whatsoever so there’s no need to clean it like the others, Kelsey explains. Then comes another mystery stone that looks like a yellow teardrop. I remember seeing it on her very first necklace iteration. ‘This one I didn’t pick with researching but I connected with it immediately, I just felt it had an amazing beautiful energy that made me feel good.’
The Buddha’s eye is the last one strung, a third eye chakra, a grounding root chakra I’m told, that has to do with confidence and connection.
I ask her if she sees these necklaces as singular objects or just as a means to suspend individual entities. ‘It’s just like a template, a container, the string is the container and the crystals are their own things.’ Like a clothesline, I say. It just needs to hold up the clothes.

Earlier in the day of our interview, Kelsey and I had taken a scrapped silver-wire safety pin from my bench and jimmied it around a brand new crystal. It’s by far her favourite, an Arcturian Star Berry, as she calls it. She ordered it online from a clairaudient woman (she hears psychically) in Wisconsin. She and this crystal had an instant connection. ‘I can’t explain how, honestly it just feels like a really nice completion to me when it’s around, it’s like some kind of companion.’ This is probably because Kelsey proclaims she’s lived a past life on Arcturius, a planet in our universe inhabited by peaceful and loving 5th-7th dimensional beings, a highly advanced species that use crystals as well. I won’t get too into it but she learned this about herself by going through a past life regression with Grace. I also write this with the risk of making Kelsey sound crazy, but she’s not.
Kelsey decided that the Arcturian Star Berry as such deserves its own necklace. But this time there’s no thread. Instead, a substantial sterling silver chain takes its place. And that means there are no knots either, but a large steel safety pin from which the crystal hangs. It also doubles as the necklace’s clasp. These decisions are still practical but also a bit more considered than the usual thread, exalted even in comparison. ‘So now I feel much more secure. This is a more permanent thing and all metal. Metal is a conductor of energy…and I like it because it’s not too fancy and I just don’t want to look fancy.’ No fuss.

As wild as this all may seem, these supernatural concoctions have purpose. As established, Kelsey is not a jewellery person in any sense of the word, but I’ll go as far to say that her necklaces are infinitely more deliberate than a large portion of the contemporary jewellery that’s floating around right now. They have to exist. What she’s doing almost seems like the opposite of what we know jewellery to be today, which at times is only a hodgepodge of compositional confusion or a shallow interpretation of feeling or experience; Kelsey’s work stays truer to jewellery’s foundations. Sincerely involving necessity, urge and personal belief (whatever that may be) into the singular objects we make isn’t an easy task, but Kelsey does it seamlessly. She also shows us something we risk losing as we chase the purely decorative, a new material lust or just what’s hot right now. And you know what else? At the end of the day and despite it all, Kelsey’s necklaces also look totally fresh. You might want to start taking notes. 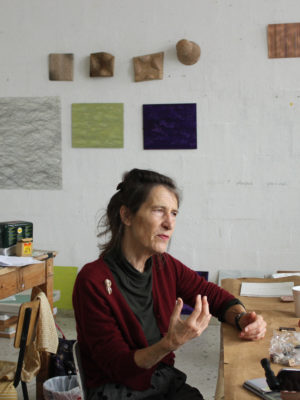 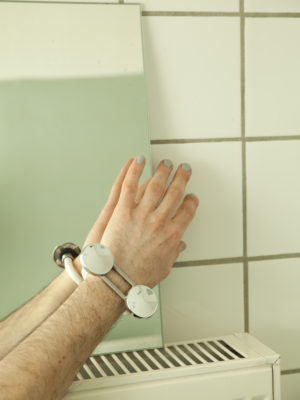 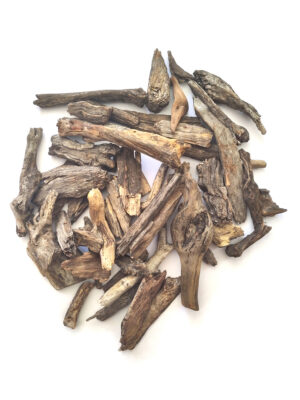 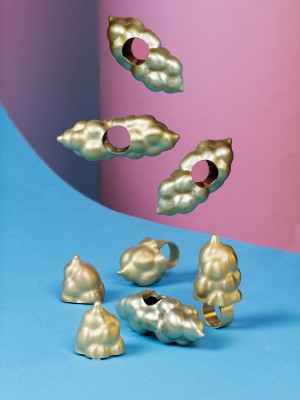